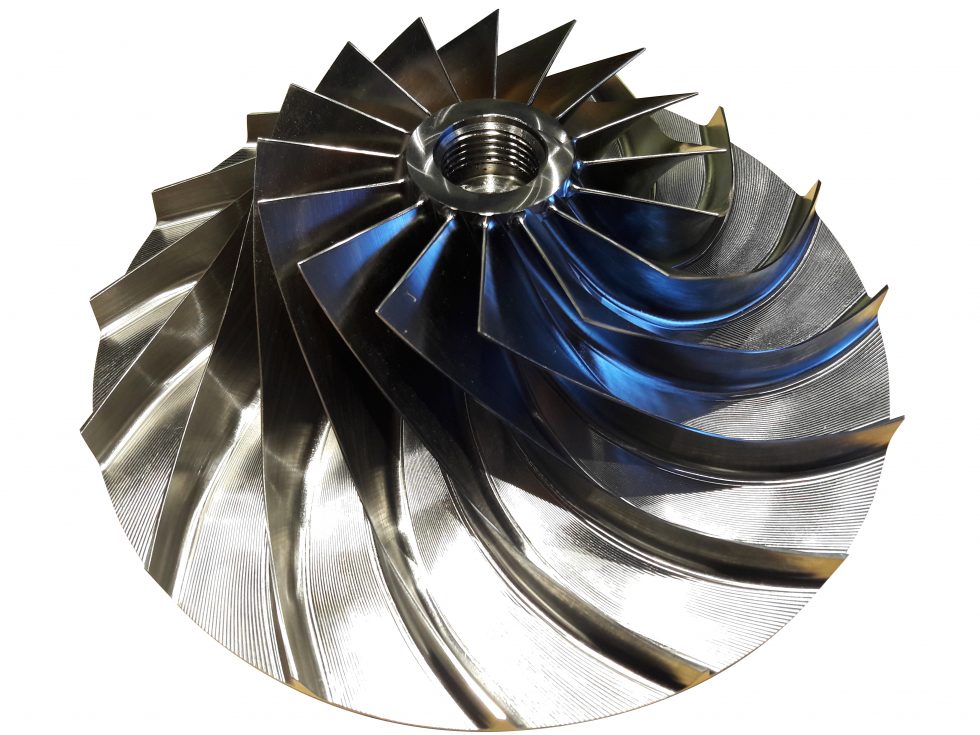 One of two locally reverse-engineered and 5-axis machined impellers.

ACTOM Turbo Machines, a division of ACTOM, recently manufactured high precision impellers and pinions for a large 190 kg/h 20 bar pressure integrally-geared multi-stage centrifugal compressor to replace these components after they had been destroyed when the compressor failed.

When the Vanderbijlpark plant of Air Products South Africa, leading producers and suppliers of gas and chemical products to industry, awarded the refurbishment contract to Sasolburg-based ACTOM Turbo Machines late last year, it stipulated a period of three months for completion of the project so that the compressor could resume operation as quickly as possible.

At the same time the refurbishment of the 2 500 kW 11 kV 2 pole AC induction motor that drives the compressor was assigned to Marthinusen & Coutts, ACTOM Turbo Machines’ sister business unit in Johannesburg.

The compressor is used for direct supply of nitrogen by pipeline to two of Air Products Vanderbijlpark’s largest customers in the Vaal Triangle.

“Three months is an extremely tight timeframe as it is about a third of the time that would normally be allocated for such a complex task, especially taking into account that we had to manufacture the replacement impellers and pinions by a reverse-engineering process, which was necessitated by the short turnaround time as set,” Chris Bezuidenhout, ACTOM Turbo Machines’ managing director, says.

“In addition, we had to ensure that the tolerances between the various components were strictly adhered to, these being especially critical in this instance as the compressor is a four-stage high-speed unit operating at speeds of between just below 20 000 r.p.m. and in excess of 33 000 r.p.m..”

Both the first- and second-stage impellers and pinions had to be replaced by newly manufactured units. “We manufactured all these to a tolerance with a margin of error of 0,02 mm, which is well within the norm to ensure extra protection against any risk of damage during operation,” Bezuidenhout points out.

All the rotating components, comprising the gear set, impellers and pinions, were balanced in accordance with the international ISO 1940 specification. The compressor was then assembled and delivered to site where together with the motor, as modified by Marthinusen & Coutts, it was installed by ACTOM Turbo Machines technicians in Air Products’ plant.

Further critical procedures carried out by the business unit comprised laser alignment and fault-finding on all pipe stresses before making ready for commissioning, followed by a rigorous step-by-step start-up procedure. “The start-up procedure is critical to protect the machine against possible damage during the run-in period. This is concluded by running of a surge curve to confirm that the unit has been run-in successfully and is operating optimally,” Bezuidenhout explains.

He adds : “During commissioning Air Products personnel were exceptionally hands-on and supportive and assisted us wherever possible.”

The work performed on the motor consisted of a modification to the rotor to reduce the excessive vibration that the unit experienced when Marthinusen & Coutts assessed it at its main electrical rotating machines repair and refurbishment facility in Cleveland, Johannesburg.

Mike Chamberlain, the division’s operations executive, says: “With ACTOM Turbo Machines and Marthinusen & Coutts attending to all the mechanical and electrical work covered by this contract, the customer has had the benefit of enjoying the complete one-stop solution that we now offer.”

Mike du Toit, Air Products Vanderbijlpark’s central operations manager, says the project as executed by ACTOM Turbo Machines was a model of professionalism. “They kept us up to speed with what was happening on a continuous basis, so that we could communicate with our customers to explain exactly what the situation was at any given time.

“I would like to have what happened here happen on all our projects where specialist contractors like ACTOM Turbo Machines are involved. We had some delays on this project but they were well communicated and actions were put in place to mitigate the delay,” he concludes.