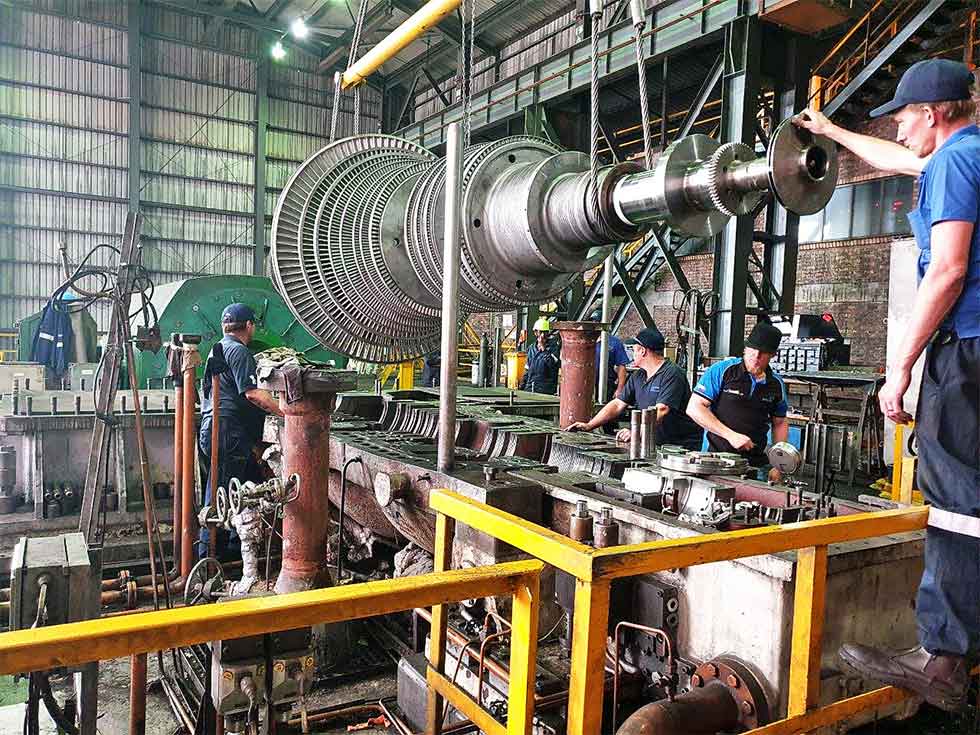 A 40 MW turbine generator from ArcelorMittal’s Vanderbijlpark works was repaired on a fast track schedule by ACTOM Turbo Machines.

The emergency repairs were required after the generator broke down in October 2018, with damage including failed bearings on the generator train. ACTOM Turbo Machines, a division of ACTOM (Pty) Ltd, undertook to complete the work and have the generator back in operation by mid-December 2018.

Demonstrating its high level of expertise as a mechanical repairer, ACTOM Turbo Machines first diagnosed all the elements that would require attention during the repair. All four bearings – as well as the rotor sealing elements – were found to be damaged. Other damage, which was unrelated to the October failure, was also discovered.

“The damage involved a crack on the high-pressure (HP) gland section of the main steam casing, while a second unforeseen irregularity was a malfunction in the starting or auxiliary oil pump,” Danie Bloem, ACTOM Turbo Machines’ project manager on the contract, says.

Other irregularities were an incorrect bolt clearance on one of the HP palms, probably due to faulty installation.

“In addition to repairing the damaged bearings, we also had to recondition a spare set of bearings that ArcelorMittal had in reserve,” Bloem says. “The sealing segments were replaced with new ones manufactured at our Sasolburg works.”

He notes that the process of repairing the crack in the main steam casing took the team five days, working around the clock.

“A high level of welding expertise was required here, as the casing is made of a special material,” he adds.

The repair of the starting oil pump was also performed in only two days. This required the manufacture of a new shaft, and also the reconditioning of the mechanical seals.

Once the generator resumed operation, vibration testing confirmed that its performance had improved significantly, Bloem points out.